A different kind of pain

Triathletes are no strangers to discomfort. It comes in many forms like training-related muscle soreness, blisters and chafing or perhaps the grueling demand of threshold intervals in the dead of winter before dawn (no hard feelings, Flanny). It seems that pushing oneself outside of the typical peaceful realm of everyday life is part of the appeal of such athletic endeavors.

While I have become rather accustomed to certain types of pain, the past several months have exposed me to new facets of torment, both physical and mental. Navigating this virtual obstacle course of optimism and defeat is proving to be quite the personal journey. Here are a few snippets of my odyssey.

Where’d the sunshine go?
Being stuck inside is painful for me. If you read my Miami70.3 race report, you’ll recall that I had some nagging ankle issues going into the race. The consistent inflammation that occurred with running and skiing forced me to stick to the trainer and pool over the winter months, drastically impacting my mental state. I struggled to find meaning and enjoyment in my workouts. I don’t live to train. Rather, I use my active, outdoor lifestyle as a catalyst for fueling my competitive nature. Asking me to hole up indoors (even in the wintertime) is like asking Jesse Thomas to race without his aviators…not gonna happen.

Swimming hurts
Why does it seem that swimming is frequently the triathlete’s nemesis? In his article, Diaryof a Wimpy Swimmer, Jordan Rapp states that he never learned to be comfortable being uncomfortable in the water, “which is the real difference between someone who just swims and a swimmer.” I have embodied this mentality over the past 6 months and forced myself to think like a swimmer. This means doing whatever excruciating workout our master's coach Kyle devises at our 5:30am sessions. I’ve become more accustomed to doing IM until I resemble an active drowning victim. I’m learning to embrace that lung-bursting, tingly-legged sensation that follows hypoxic sprint sets. Though I’m tempted to agree with my friend Dusty (see his thoughts on swimming here) I’m also gradually learning that pushing myself out of my comfort zone in the water is taking my weakest leg of triathlon into a new realm. More on this later.

Time Trials make me want to cry like a baby
With my ankle being uncooperative and forcing me to forego my first planned race this season (St. George 70.3) I was seeking some kind of competitive outlet. When I texted Flanny that there was a local time trial coming up one weekend here was his response: 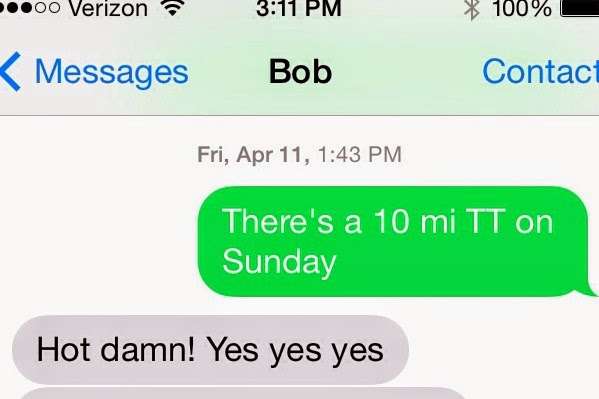 Pretty sure he piddled on the carpet with excitement. This was my first experience with an all-out, 10-mile effort on the bike. I guess if it feels like you’re coughing up Brillo pads for a week afterward you’re doing it right. Since I don’t own a road bike, I was relegated to racing events that allowed TT bikes on course. Thus, I decided a Time Trial Festival sounded like fun. Doesn’t it??? Turns out it REALLY HURTS. I have a whole new respect for pure cyclists demanding repeated maximal efforts of their bodies like that. The prologue left me with an inferno in my esophagus that wouldn’t quit, along with the sensation that I had hot wings stuffed deep in my ear canals. No joke. The following day we were to complete a 40k time trial and cap it all off with…wait for it…another 10k time trial- Merckx style! I’m feigning enthusiasm because it hurt in a magnificent way. And I would do it again in a heartbeat.


DNF = Did Not Fail
Going into Boise 70.3, it was becoming apparent that my little ankle problem was not going away. I’ll spare the details at this point, but running was not an option. The disappointment of this realization was suffocating. Being only my second season racing in the pro field, and having yet to execute a 2014 race (with no prospects in sight) was excruciating emotionally. I spent several weeks processing the mental demons that nagged at me, causing me to feel defeated before even toeing the start line.

I had a choice to make. I was reminded that I could still participate in my hometown race, but my goals would be different. I solicited input from coach Flanny, multiple friends and of course MFMG. “Whatever decision you make, own it and follow through,” urged Flanny. Matt was adamant that I start the race, if for no other reason than to do battle in the swim. Ultimately, choosing to complete an aquabike in the pro field was the right choice for me. It was important for me to gauge my swim fitness against the pro ladies and have the privilege of racing the bike with them. I had placed nothing in T2 prior, so I knew my race would end as soon as I completed the bike leg. Arriving in transition was a culmination of both torment and personal glory. I had accomplished what I had set out to do without compromise.  Though it was my first-ever DNF, it was on my terms and hinged on a new set of objectives that forced me to transcend any physical or mental pain that threatened to obscure my focus.

Ready to kick some ‘boot’ie 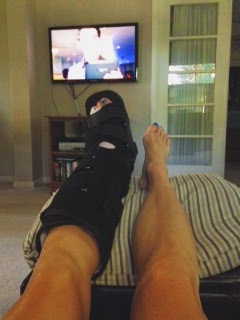 So here I sit, post-op with a heavy-ass boot dangling off my left leg. I’ve been given a couple different medications for pain, was warned of discomfort lasting for days afterward, and am prepared for the slow, steady road to recovery. Funny thing is, this surgery is the least distressing thing I have experienced all season. In fact, having a clear diagnosis and a genuine feeling of optimism is making for a relatively painless experience thus far.  And in any case, so long as I’m learning from the pain, I’ll welcome more in the future.